Over the last 10 years, hundreds of studies have been done on the problem of whiplash, and most of those studies have focused on the most common symptom of the diagnosis: neck pain. This concentration of research has resulted in a clear understanding of how a rear-end collision can result in injury. 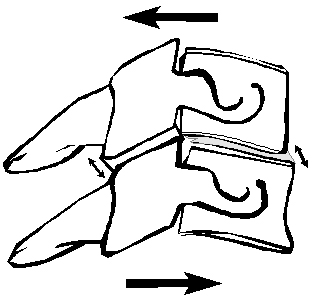 Shear forces can cause tearing or stretching
of the soft tissues that hold the spine together.

The primary reason why rear-end collisions cause injury is that the human spine is designed to withstand vertical forces, while a rear-end collision is a horizontal force. The vertical forces are known as “axial” forces. The horizontal forces, known as “shear” forces, cause unnatural movements of the cervical spine and can result in damage to the ligaments of the neck.

A new study has now shown that a similar injury mechanism occurs in the lumbar spine as well. Inspired by the research on the cervical spine, the authors of this study applied the same methodology to the low back.

They placed a cadaver in a standard automotive seat and placed acceleration-measuring devices in the vertebral bodies of T1, L1, L3, and L5. The seat was placed on a platform that was subjected to rear accelerations of 5g and 8g, or speeds of approximately 8 and 12 mph, respectively. The researchers collected acceleration data at a rate of 10,000 samples per second. Radiographs were taken of the spine before and after the tests.
The study found that different parts of the lumbar spine experience different strains during a rear-end impact:

“The anterior shear strains had mostly a biphasic response. Spinal strains started at about 30 msec after impact and peaked at the T12 vertebra at approximately 120 and 370 msec, whereas in the L4 vertebra, it peaked at 200 and 380 msec. The anterior strain patterns of the L4 and T12 vertebrae were in diametrically opposite directions.”

The direction and strength of the forces suggests that the car seat rapidly accelerates into the occupant’s spine, causing the thoracic and lumbar curves to straighten.

The authors of the study carefully examined the forces involved in the spine during the test impacts. They found that the car seat exerted about 1500 Newtons (approximately 337 pounds) of force, in a fraction of a second. The authors relate this to how the lumbar spine can be injured in rear end collisions:

“In the current study, no bony injuries were observed in the lumbar spine, either by visual inspection or by radiographic studies. In the absence of clear bony pathology after rear-impact collision, we propose that irritation of or injury sustained by the richly innervated spinal soft tissues (i.e., muscles, ligaments, capsules) plays an important role in the pathogenesis of lumbar pain after whiplash injury. This proposition is supported by work of others who performed lumbar spinal segment shear tests and showed that soft-tissue injuries occurred with a shear load as low as 1200 N.”

The 1500 Newtons of force was reached in the 5g test, which was equivalent to an 8 mph collision. So, according to this preliminary study, the car seat back exerts enough force during such a collision to injure the connective tissue of the lumbar spine.